Home » Coding » What is a Programming Language?

Most Popular Programming Languages to Learn 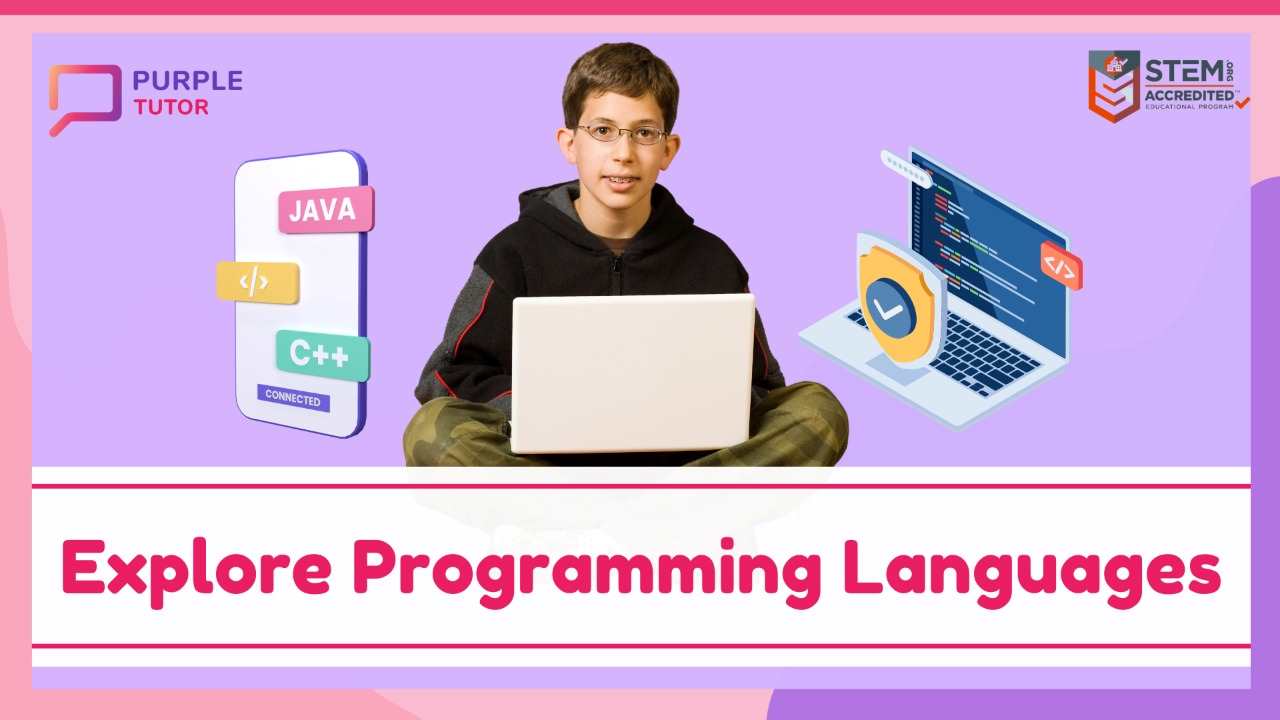 In today’s time, learning programming is a great skill for kids to explore, learn and develop. It can help children develop valuable skills and open up new opportunities. It is important for parents and educators to provide children with the opportunity to learn programming, especially at an early age. This article will guide you to different programming languages, so that you can pick the best for your kids to start learning.

What is a Programming Language?

There are several programming languages that are designed specifically for kids to learn. Some of the most popular ones are listed below –

Scratch is a programming language and visual development environment designed for kids. It allows children to create interactive animations, games, and stories using a drag-and-drop interface.

Scratch uses a block-based syntax, which means that the code is represented by blocks of different shapes and colours that can be snapped together to create programs. Each block corresponds to a different command or instruction, such as ‘move 10 steps’ or ‘play a sound’. This makes it easy for children to understand and experiment with programming concepts.

It is a popular language for web development. It is used to create interactive and dynamic front-end experiences on websites. JavaScript programming language is found in almost every web browser, such as Chrome, Mozilla, Microsoft Edge and Safari.

This programming language helps to dive into web development, game designs and more. It helps in creating animations and effects, such as fading in and out or moving elements on the page. Learning JavaScript can be an engaging and creative way for kids to express themselves and build their own projects.

Python is a versatile and widely-used programming language that can be used for web development, scientific computing, data analysis, artificial intelligence, and more.

It is the process of teaching children how to write programs in the Python programming language.

It is a simple and easy-to-read syntax, which makes it a great choice for children who are new to programming.

Lua is a lightweight, high-performance programming language that is widely used for scripting in video games and other applications. It is designed to be easy to learn and use. Lua is a powerful language that can be used for a wide range of purposes, and it’s particularly good for game development and scripting.

It’s a good choice for children who want to learn to program. It is also widely used in industry, making it a valuable skill to have in the future.

Users can also create their own objects and functions using Lua scripts and share them with other users. This allows developers to create complex and unique games that can be played by a wide audience.

HTML tags are used to define the different parts of a web page, such as headings, paragraphs, lists, images, links, and more.  HTML is a markup language, it’s used to create the structure and layout of web pages. It’s usually used in combination with other languages such as CSS and JavaScript to create dynamic and interactive web pages.

These languages are a good starting point for kids who want to learn to code. If you are not sure which language to learn first, then you can try a Free Demo Class by Purple Tutor. As per the child’s interest, our expert teachers guide you to pick the right courses to begin your coding journey.

A: Yes. the first demo class is free of charge. You can book the free class from the booking link.

2. What are the courses that Purple Tutor offers?

3. Is the coding course schedule flexible?

A: The courses for kids are flexible. You can select any time and any day that works around your child’s schedule.

4. How do I know what coding course is right for my kid?

A: The teachers assess the level of the student in the demo class on the basis of which the course is suggested.

5. Will my child receive a certificate?

A: Students get certificated after completion of each course. The certificate recognises the skills the student learnt and the level of mastery achieved.

6. What do you require to learn coding from Purple Tutor?

A: You need a laptop/computer with a webcam and a stable internet connection.

7. What level will my kid reach in coding expertise after completing your course?

A: Kids learn everything about coding that exists in their courses like Basic programming concepts, algorithms, sequencing and then writing code to solve puzzles, projects and geometric patterns. According to the course that they have undertaken, they will learn as per the curriculum.

Want to try a session before starting?